The wait time for an EB-5 visa depends on the number of people in line, and the rate at which the line moves. Both factors are complicated and can be tough to pin down. We’ve recently received significant new information related to each factor. This post attempts to put the new information in context. (Note: this post only concerns people interested in EB-5 timing for China, Vietnam, and India.)

The EB-5 queue normally moves at a rate of about 10,000 applicants per year, with about 700 per country, but this can vary. I recently wrote a guest post explaining How EB-5 Visa Numbers Will Increase in FY 2021. I have another post in progress to discuss visa availability and the movement of the EB-5 visa queue for China specifically, in light of recent developments.

The queue size question is complicated by spotty data and multiple stages. The following image illustrates three ways subdivide the EB-5 queue, when trying to calculate it. If you don’t have time to read the whole post, at least spend time gazing at this image, and see how it puts available queue data in context. 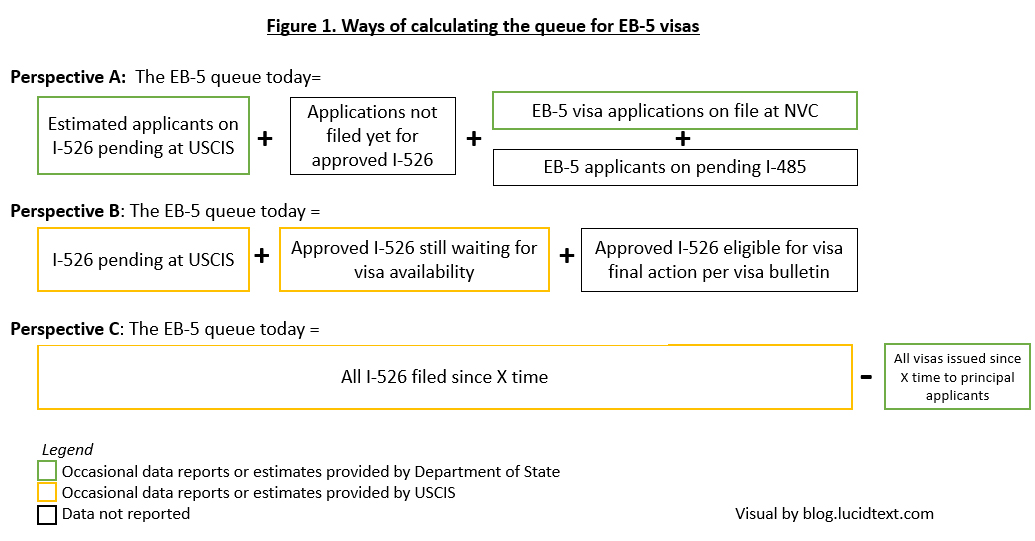 Perspective A looks at the queue in terms of stages between USCIS and Department of State.  Visa Control Office Chief Charles Oppenheim uses this perspective when making EB-5 wait time estimates. But Mr. Oppenheim calculates from two of the four variables in this picture. His wait time estimates count pending I-526 and pending applicants at the National Visa Center, and disregard the population segments for which he lacks data: people with approved I-526 but no visa application yet, and people with pending I-485. If those segments are small, then omitting them doesn’t matter much to wait time estimates. Historically, I-485 numbers have been indeed been very small (though Indians might change that going forward). The population of people between I-526 and visa application might be significant, particularly for China.

Perspective B reflects an alternate way to subdivide the EB-5 queue along the lines of before/after I-526 approval, and before/after visa availability. This perspective has come into focus because USCIS just started to publish data for a key variable: number of approved I-526 waiting for visa availability. I still can’t complete the calculation, because there’s only data for two of three segments for Perspective B. But the new data is tantalizing, because it overlaps with the major unknown from Perspective A.  The population of people with I-526 approval and no visa application on file yet (unknown) is a subset of the population of people with I-526 approval and waiting for visa availability (now reported).

So let’s look at these new data reports from USCIS, and think about what the numbers mean in context.  The following screen shots show reports as of October 2019 and April 2020.

Perspective A and B are both limited by lack of data for a major population segement. I tend to favor Perspective C, which makes queue calculations simply from I-526 filing data, to avoid unknowns about where people currently fall in the process.